Secrets to where to Disneyland employees eat
By David W. Smith
Hello Hidden Mickey Book Fans!
Like our Hidden Mickey novels, we hope to inspire some adventure in our readers; consider it a 'quest' to decipher some 'inside' information about Disneyland and things related to Disney. 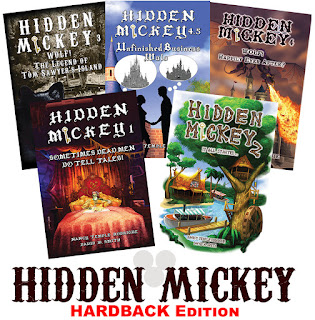 BUY THEM HERE
While some people might believe that the 'cast members' of Disneyland live off the remains of unfinished Mickey Ice Cream bars or Popcorn found in the bottom of discarded popcorn boxes, the truth is, there are two employee cafeterias at Disneyland. The first one is off Main Street near the hub. As you approach the Tomorrowland entrance, there is a First Aid center just past what used to be the old general store at the end of Main Street. Just past this First Aid center is a Cast Member's entrance which leads to back stage. Just past this entrance is one of the two employee cafeterias.


The second one is on the west side of the park below New Orleans Square. Actually, it isn't really below the Square, it is behind part of Pirates of the Caribbean, and down a large tunnel that starts just behind Indiana Jones and the left side of Pirates.
Another entrance to this cafe is to the right of the men's restroom in New Orleans Square, just to the left of the Disneyland Railroad train depot in the Square. Down a short hall past the men's restroom is a door that leads to a stairway. This stairway takes you down to the DEC, or Disneyland Employee Cafeteria (that is what it was called when I worked there). It was nicknamed the PIT, not because of the perceived quality of food, (which was actually not bad!), but because when it was opened back in the early 1970's the walls inside were painted like race cars. Hence the name PIT, short for Pit Stop. 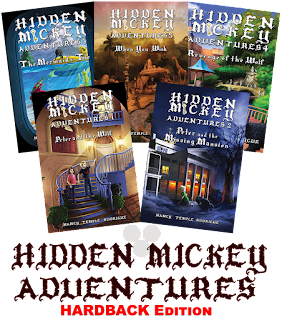 
There are numerous break areas around the park for cast members too. Behind the Hungry Bear Restaurant in Critter Country, there is a covered patio with a ping pong table and chairs to relax or read in. In between Frontierland and Adventureland is a semi-circle of shops and food stops. In the middle of these shops is an open area with stairs that lead up to second floor offices. There are covered break areas up on the balcony of this second floor. These are the offices of various managers of the west side operations.


There are break areas in Fantasyland and Tomorrowland too as well as one behind Toontown.

Well... that's it for this issue...
Enjoy, and have a Great Hidden Mickey Day!

Going through my Disneyland mementos, I came across some badly crumpled plastic leis that I had saved from the Tahitian Terrace when our family had dinner there in the late 1960's. 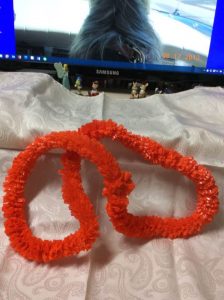 The Tahitian Terrace had been mentioned in one of my novels, Hidden Mickey Adventures 4: Revenge of the Wolf.  In Chapter 7, Walt and his team of Imagineers are going through the Park on their customary walk before the Park opened for the day, seeing how everything looked.  On this day, Walt especially wanted to see the Tahitian Terrace that was under construction.  The centerpiece of the restaurant was a huge African coral tree.  Walt decided that the branches were so low that they would obstruct the view of the nearby Jungle Cruise boats as they returned to the dock.  He had asked that the base of the tree be cut in half so a few feet could be added to the structure, and he wanted to make sure the work was done.
As I remembered the wonderful times we had at the Tahitian Terrace, I realized that there are no markings or stamps or anything on this lei that would indicate it was from Disneyland's past.  There is only my memory of when we got it and the fact it has been in my collection for decades.
This lei recalled other items I had gotten through the years at Disneyland, but didn't have any markings on them that said they, too, were from the Park.  Here are a few of my items: 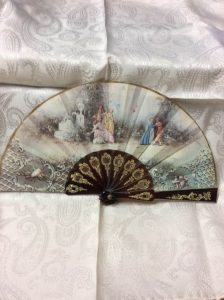 This lovely little fan was bought at the One Of a Kind Shop that used to be in the entrance to New Orleans Square.  It was a wonderful shop that had a little of everything from around the world.  The only marking on this fan is a small sticker that says Made in Spain. 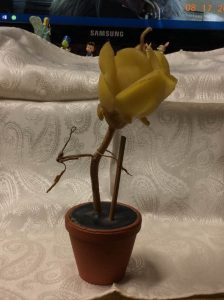 Many of you remember the Candle Shop on Main Street.  Located in the same building as the Emporium, it was stuffed to the brim with candles of all shapes and sizes.  This yellow rose, its leaves long crumbled, was purchased there, probably in the early 1970's. 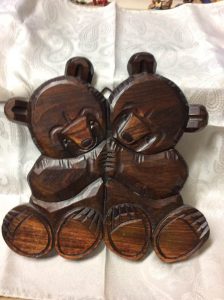 The last unmarked treasure I am sharing is this wooden wall hanging of two darling teddy bears.  This was from the days of the Country Bear Jamboree and Bear Country.  The shop was in the far back edge of the land, attached to the Mile Long Bar.  I believe the store was called the Wilderness Outpost.  This has hung in my kitchen since 1976 or 1977!
So, these have been a few of my special unmarked Disneyland treasures.  How about your collection?  Do you have some memorabilia that has no Disney markings, but you can recall exactly where it was purchased inside one of the Parks?  How about sharing some of your pictures with the other readers!  We would love to see your pictures and hear about your memories!
Be sure to check out all of my Hidden Mickey and Hidden Mickey Adventures novels to find more exciting, fascinating history about Walt Disney and his treasure of a park: Disneyland. Share them with your Disney-loving friends. Here are quick links to all the books: 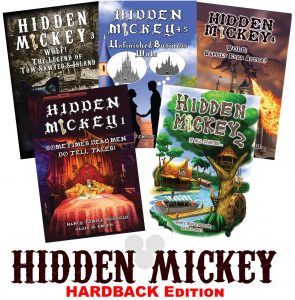 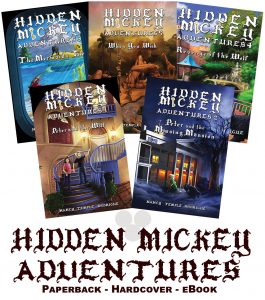 There are only a few beautiful Hidden Mickey Heart Pendants left.
First introduced in Hidden Mickey 2: It All Started... and featured throughout both series of novels.
Limited edition
30 carat lab created RUBY on a 14K Yellow Gold Vermeil "Hidden Mickey" 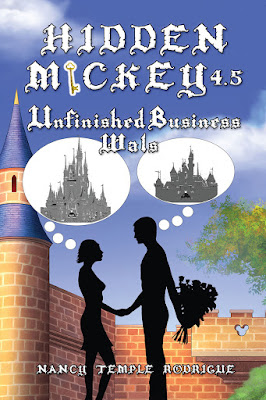 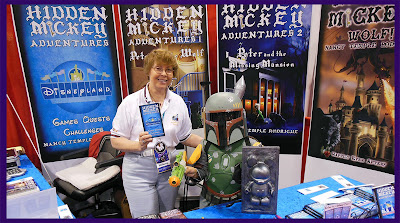 at:  Disney's D23 Expo at the Anaheim Convention Center

Nancy will be in Booth 310E
signing her new release
HIDDEN MICKEY 4.5: Unfinished Business-Wals
as well as her other Hidden Mickey Adventures.

Adventure Mysteries about Disneyland, written for all ages (9 to 90). 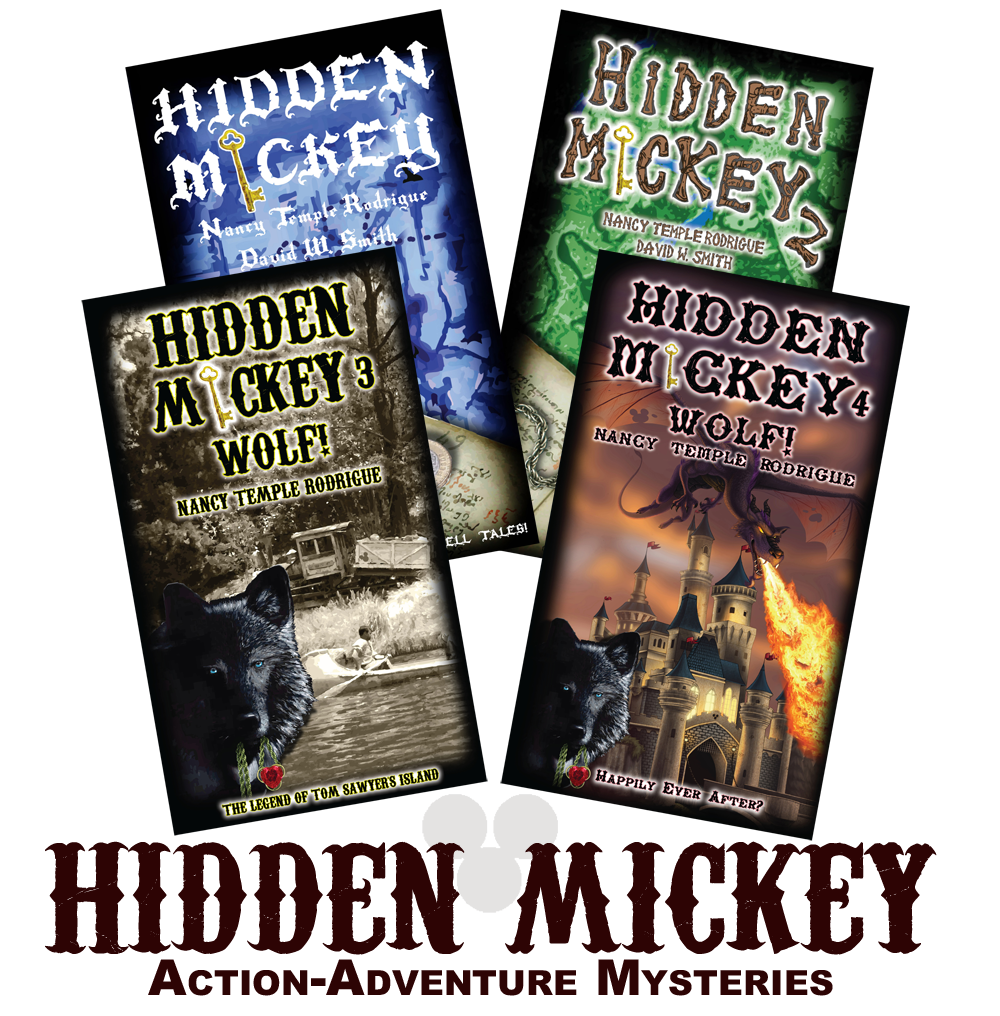 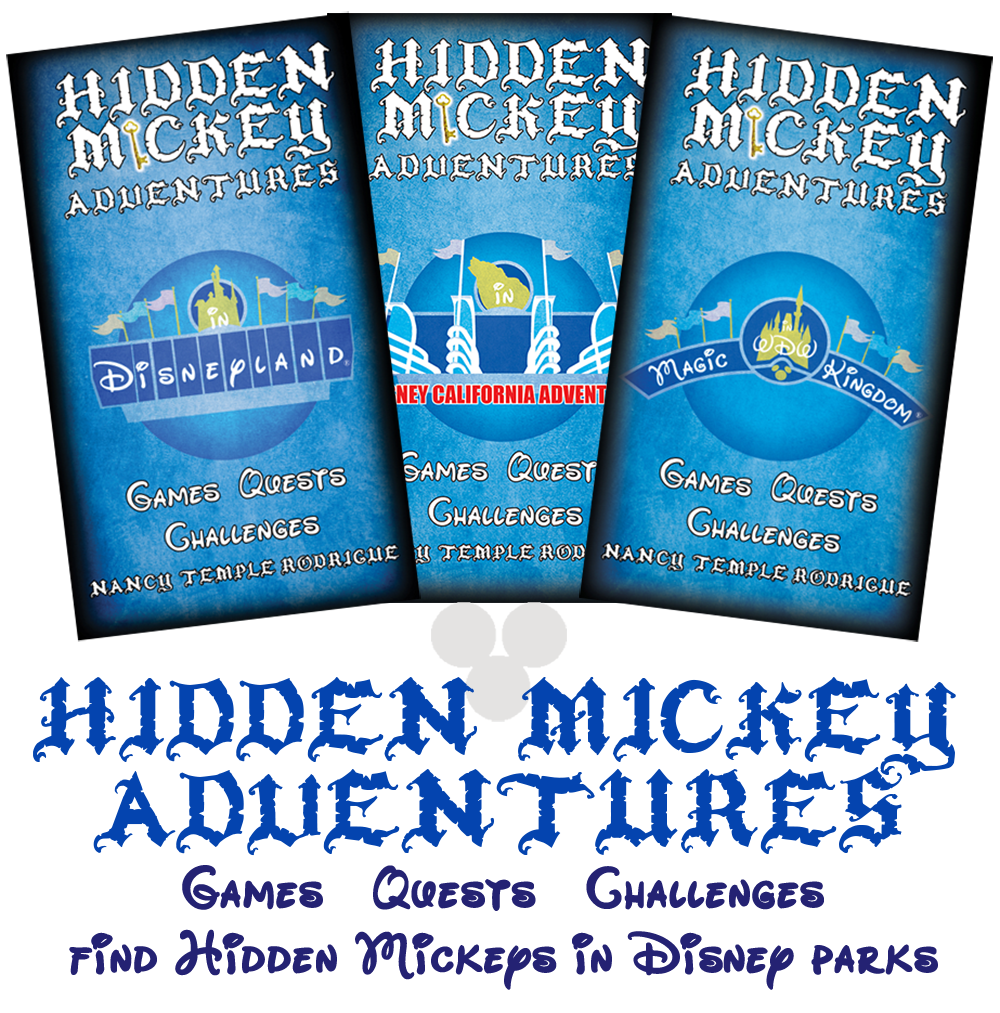 You won't want to miss this great Disney Event where you can meet the author and get Autographed books.

L A Times Festival of Books

at the University of Southern California

These action adventure mysteries about Disneyland were written for all ages (9 and up).

If you don't have the the Hidden Mickey series, visit Booth 126 to get signed copies

You won't want to miss this opportunity to meet the author and get Autographed books.

Pirates of the Caribbean Secrets
By David W. Smith

Hello all you Hidden Mickey Fans!
Like our Hidden Mickey novels, we hope to inspire some adventure in our readers; consider it a 'quest' to decipher some 'inside' information about Disneyland and things related to Disney. 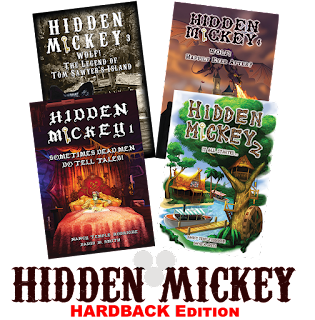 BUY THEM HERE
Because there are some scenes in Hidden Mickey that take place on Pirates of the Caribbean, I thought it would be interesting to share some inside information about the ride. While working the ride for three years (1981 ' 1984), I found there were many elements of the ride, which I become familiar with, and found interesting; some of which I want to share with you here.
Cameras
Regular visitors on the ride no doubt know that there are several infrared cameras throughout the ride. These cameras serve several purposes: One, they are to make sure guests are remaining seated throughout the ride and especially on the two 'waterfalls' and the ending 'up-ramp' where the boats are moving at sharp angles and at different speeds. Two, they are to make sure the boats don't back up in a section of the ride. On rare occasions, a boat's guide wheel will jump the ride flume, (either because of a improperly balanced load of guests or if a boat was rocking due to guests leaning side to side). Three, the use of flash pictures is discouraged due to the blinding light the flash produces for other guests. These flashes show up like nuclear bombs going of on the television monitors that feed the infrared camera images to the cast member who is working the 'Tower'. (The Tower is the dispatch booth above the load and unload dock which one cast member is responsible for dispatching the boats after receiving a 'green light' by the unload host who signals that the boats are loaded an the guests are seated properly by pressing a button on the underside of the handrail on the unload side of the dock.) Also, if people are reaching outside to boat to splash one another, this could potentially harm a guest if the boat were to bump up against the ride flume at the wrong time, possibly pinching the guest's fingers painfully! Guests who are taking pictures or splashing will usually initiate a loud speaker announcement directed to that particular part of the ride asking for the individuals to resist either/or. The Tower operator has various buttons that direct the speaker to that part of he ride he can see within the range of the infrared camera image.

BUY THEM HERE
Transition Tunnel
Many people believe that the rides at Disneyland go 'underground.' Well, this is a slight misnomer. Actually, because parts of Disneyland are built higher than the main entrance level, (yes, you are actually walking slightly up hill as you go up Main Street and head into Adventureland and Frontierland. Thus, when you go down the 'waterfalls' on Pirates, or go down in the 'Stretching Room' on Haunted Mansion, you are actually going down to 'street level' of the park. If you look behind the Disneyland Tram loading station in Downtown Disney, you will see several very large buildings behind the vine-decorated fences. These are the Ride Buildings that house Pirates, Indiana Jones, and Haunted Mansion.
The Pirates of the Caribbean ride is such a large show that there are actually two Ride Buildings that house all the scenes below Park level. As your boat leaves the Treasure scene on Pirates you enter a dark, low tunnel that lets out in the large open area where the large pirate ship is having a shootout with the fort on the opposite side of the room. The dark tunnel that separates the treasure room from the fight scene between the ship and fort is called the 'Transition Tunnel''it basically is the connecting tunnel that moves the boats from the first Ride Building to the second.

Well... that's it for this issue...
Enjoy, and have a Magical Hidden Mickey Day!